Once upon a time Charming Billy asked me, “If you could pick one song to sum up your life, what would it be?”

We both thought about it. Down through the trees about thirty yards the river waited. There were people partying on the sandbar. Next to the old picnic tables where we sat a keg of beer was nestled in a bed of ice inside the largest plastic garbage can ever made. A big cooler full of assorted brews was on top of a picnic table near where we sat. We always tried to stay near the beer. I had finished one can and started another one before either one of us came up with an answer.

“Now I’m not saying I’ve killed a man, but that would be a good choice.”

“You are a poor boy from a poor family.”

“I didn’t have to beg the king for my life though.”

“You think he’s begging the king?”

“Who else do you beg for your life?”

“I figure it’s the Pope. All that shit about Galileo.”

“I don’t think Galileo ever killed anybody.”

“So what’s Galileo got to do with it?”

There was some splashing and a playful scream. More splashing. Laughter. Billy opened another can of beer.

“Is this the real life or is it just fantasy?”

“Cheers to that.” We each raised a can and drank.

“You know, if you think about that song, I mean really think about it, it doesn’t make any fucking sense at all.”

“You think too much.”

“No, seriously. It’s not like Stairway, which is a weird song but it tells a story. And Free Bird. That’s just a long goobye letter essentially, but it makes perfect sense.”

“You don’t have to think about everything, you know.”

“Yeah, but it doesn’t matter. That’s how it ends. Nothing matters. Nothing really matters to me.”

“You’re such a fucking nihilist.”

“Besides, it doesn’t end that way. It ends with any way the wind blows.”

“Even more to my point.”

“Life has no meaning. It’s all chaos and random chance.”

“So it was random chance that he committed murder and now has to beg the king for his life.”

“How do you figure?”

“That craziness at the end. Where it gets all metal. That’s hell. He gets beheaded and ends up in hell.”

“Beelzebub has a devil put aside for me.”

“Well, because that’s what kings do. Scaramouche Scaramouche can you do the fandango is about the dance your legs do when the guillotine takes off your head.”

“I thought Scaramouche was a court jester.”

He lit a cigarette. “Really?”

“What about when it goes metal and he’s singing, I gotta get out.”

Billy shrugged. “Does anybody ever get out of hell?”

He gave me one of his cigarettes when I bummed one and we sat on the top of the picnic table smoking. Things got quiet down on the water. Next to us the keg shifted as the ice melted around it. Over the tops of the pines the sun was beginning to set. Long shadows stretched out from the trees and surrounded us. Then we heard some giggles near the water. Girls.

“You want to go down there?”

Someone shouted from below. Billy shouted back. Nothing happened. Pretty soon one of the boys walked up.

“You faggots hogging the beer?”

“Why the fuck didn’t you bring down some beers when we yelled up at you?” He looked at us, possibly wondering why we still weren’t moving.

We watched silently as he struggled to figure out a way to carry seven cans of beer. He finally managed to position his arms and hands so that he could carry all the cans at once. Then he turned and took a step and one of the cans fell into the dirt.

I took a second to finish my cigarette before I started to move. I bent slowly and picked up the can. Dirt had stuck to most of the can. I held the can out to him. He sighed.

I looked at him, doing my best to look puzzled and bothered at the same time.

I brushed the dirt from the can and placed it carefully in his arms.

He sneered and growled, “Thanks, asshole.” Then he turned slowly and started carefully back down the hill. Someone shouted up at him as he walked. He shouted back.

“I can’t believe you did that.”

“Whatever. I didn’t want him to start crying.”

“You know, some mornings I wake up and for a split second I think I’m somewhere else. I didn’t wake up here, in this place, with all these assholes.”

“Where would you wake up?”

“I don’t know. Anywhere but here.”

“It’s like the song says. Sometimes I wish I’d never been born at all.”

Someone started singing down at the water. Others joined in. Through the shadows and branches we could see some of them waving their lit cigarette lighters in the air. The song drifted up and we could barely hear through the trees but but we heard enough and recognized it.

“You know they voted to make that the class song?”

“Our class song. The song of our senior year.”

“The song of your life, buddy.”

“You’re lucky you live across the county line.”

I thought. “I don’t know. It’s probably the same.”

“Right now, down the river, in the next county, half a dozen shit-kickers are doing the same thing. Drinking the same beer. Singing the same goddam song.”

“I know I’m right. If I wasn’t here I’d be there with my brother or somebody else. It’s not like there’s anything to do on a Saturday afternoon other than go down to the river and drink beer and hang out with your friends.”

“And tonight we’ll hang out in the parking lot of the old drive-in and drink beer and talk about what happened at the river today.”

“Sometimes I wish I’d never been born at all.”

“Cheers to that. Fucking cheers.”

“So what did your class vote to be their song?”

He nodded toward the river. They were finishing the final verse.

We both laughed. They laughed down at the river. We laughed again, as if they could hear the joke. As if they would laugh if they did. Somebody started singing something different but nobody joined him. Pretty soon he stopped. Then they all laughed again. 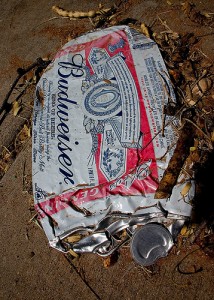 ← The Adventures of Sir Coffee and the Cheesecake Knight
Recursion, Iteration and →