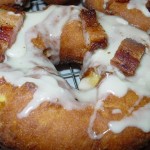 There’s a bakery around the corner where I often get doughnuts and sandwiches. It’s one of those family operations run by an Asian-American clan who have a stronger work ethic than any white Protestant I’ve ever known. They make a mean turkey sandwich on a croissant whose selling price can’t be beat.

It’s a busy day, two people waiting at the register for their doughnuts and an old man with only one ear scratching Lotto tickets nearby at the counter. A guy reading a book sits at one table eating his lunch, while another old man scratches tickets at the next table. Two skater dudes are sitting at the two remaining tables when I walk in, so I linger near the case of danishes, checking to make sure there’s a blueberry. Behind the counter a young woman struggles to handle the crowd alone. She recognizes me, recites my usual sandwich order, and says she’ll be with me as soon as she can. I tell her not to worry, I’ve got plenty of time.

The skaters are obviously three joints to the wind, their eyes examining the multitude of doughnut choices before them. One of them, eyeing a peculiar treat made by this particular bakery, exclaims, “Dude, there’s bacon on that doughnut.”

His friend laughs. “I don’t think so.”

The first one stands and leans toward the case, examining the maple-glazed doughnut covered with chunks of bacon. “Dude, that’s bacon.”

His friend stands and looks into the doughnut case. “That’s gotta be, I don’t know, like candy bacon or something.”

They look at me in astonishment. Most people in LA respond this way when a total stranger says something to them that isn’t completely rude. With their ear buds in and their sunglasses on, Angelenos sometimes forget there are other people in the world around them.

The skaters looked at me, wondering if I was pulling a joke. “Are you serious? Bacon on a doughnut?”

“That was my initial reaction,” I told them. “But have you ever had maple syrup on your bacon or sausage when you’re eating pancakes?”

They both nodded. The first guy’s eyes lit up.

“Well, it’s like that,” I continued. “It’s actually surprisingly quite delicious. Of course, that may be relative to exactly how stoned you are.” I took off my sunglasses and let them see my eyes.

“Woah, dude,” the other agreed.

The woman behind the counter stepped up. “Can I get something for you guys?” she said to the skaters.

“Yeah,” the skater replied. “Give me one of those bacon doughnuts.”

← The Expendables
The Reader and the Writer →