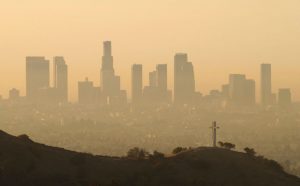 It has become impossible to go out into the world. The atmosphere is deadly. First there were droplets and aerosol carrying disease on the air. Then there were the fires, filling the air with smoke and dust. After months of coughing behind masks, the curve was flattened and the fires were mostly smothered.

Now the air is thick with fear and paranoia. A miasma of desperation hangs in every public space. The media provides us daily predictions of doom. Chaos abounds. Doom is imminent. Violent revolution waits offstage like a coiled spring.

It is election season in America.

Every four years the Presidential circus comes to town. In between we get the “off” elections, like cheap carnivals compared to the real thing. Who wants to go to Uncle Moe’s More Fun Park when they can binge on Disneyworld? Mid-term elections are the winter Olympics to the big summer games of the Presidential race. It is always a spectacle. But 2020 presents us with a show to end all shows.

In one corner, weighing in at 600 pounds of shit in a 200-pound suit, is our current reigning celebrity master and Presidential apprentice, Donald Trump. In the other corner, propped up by able partisan puppeteers and daily injections of steroid, is the walking corpse, Joe Biden.

How did it come to this? We have reach an abysmal apocalyptic time that inspires even liberals to yearn for the days of Richard Nixon or Ronald Reagan. Nostalgia for a golden age is of course a key element in the development of a fascist state. And America is definitely speeding down that road like Mad Max on a vengeance run. There is no doubt that America has become a neo-fascist empire, crumbling at the edges, ready and willing to act with violence and retribution of anyone who challenges our hegemony or threatens our oil supply.

In spite of the best efforts of the Democratic Party to scare the shit out of everyone, there is little difference this election will make in the deliberate progression of the United States into a corporate-controlled crony-capitalist nightmare. There are Americans of course who will deny this is fascism, but something tells me those folks wouldn’t admit to it even if they were awaiting execution for their political beliefs.

People on the streets feel it, even if they misidentify the source. What passes for “the left” in America demurs the fascists are all on the right, and the zealous crimebusters they’ve nominated won’t enact their own police state. Delusional right-wingers laughably claim that an anti-fascist group is actually fascist, imagining a loose-knit confederation of cosplaying anarchists can someone become a threat to freedom. 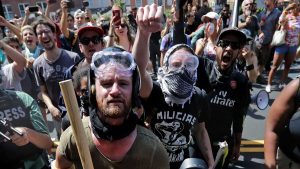 A great wave is coming, but it’s not the wave you expect or fear. We have already succumbed to the fascist mindset, using the rubric of “endless war against terrorism” to enforce our version of globalism, militarizing domestic police to employ violent and murderous tactics against any transgression or dissent.

Election 2020 offers Americans a choice of flavor for their fascism: Vanilla or vanilla-lite. Neither of the candidates even pretends to be the Neapolitan blend of three flavors. Democrats offer the activist left a choice of voting for an undead Senator or remaining “ideologically pure” in standing by and allowing a cheap television Mussolini to serve another four years.

The street-fighters opposing both real and illusory fascisms are not likely to stand down after the election. Each candidate offers a solution to the unrest that surrounds us, but neither provide much detail. History suggests that no matter which party occupies the White House, any dissent from or disruption of the capitalist machine will be met with deadly force.

Revolution is not coming. Revolution is here. It’s online, on the streets, on fire, and on call, standing back and standing by. Nothing can stop it now.

This world gets more and more like a science fiction novel every day.