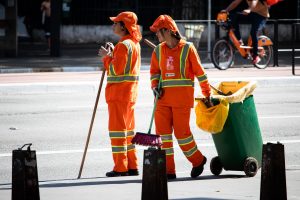 With people locked in their homes and all but a few designated businesses closed, the economy slows down so fast people think it’s stopped. It is the great paradox of relative motion. Normally we are all moving along on the train of the great capitalist machine. We barely notice the motion, and if we do it’s whizzing us right along with it. Only the disadvantaged and destitute ever risk being left behind (which is why we must always make a place for them, in the back of the furthest train car, if only as a reminder to stay on the train). But when the governor pulled the emergency cord the economy blew a whistle and the great train heaved nearly to a halt.

Work may have stopped but the bills won’t stop coming. The sun didn’t stop in its place, so the days will keep changing and pretty soon the first of the month will roll around like clockwork. Banks want mortgage payments. Landlords need rent. Renters have been ordered to shelter in place. One million unemployment claims have been filed since March 15.

Governor Newsom says that most major banks have agreed to delay foreclosures and waive mortgage payments for those affected by the virus for 90 days. Bank of America only agreed to a delay of 30 days. The gears of the capitalist machine have to keep moving even if it means grinding up the consumers whose purchases normally feed the beast because it turns out hey their bloods and bones will do just fine (we’ll always have the next generation to spare).

Newsom also ordered a “moratorium” on evictions. While the order extends the time renters have to respond to an eviction lawsuit, tenants groups say it does not go far enough to protect vulnerable renters.

Renters don’t have to pay rent but landlords still have to make mortgage payments. You don’t have to be a weatherman to know which way that wind is blowing.

Meanwhile the store shelves are like a scene from Soviet Russia, Brezhnev era, and the people on the streets are like extras cast for the desperate look in their empty eyes. People are beginning to don masks. With their eyes isolated above protective fabric, the fear in their eyes seem magnified.

In California, there have been 104 deaths and 4,917 cases reported.

← Life is Cancelled
Commie, Get Out! →