When Harry met Morrie it was 1969. They were two young men, both in their early twenties, both recently released from military service. Morrie was a Navy man while Harry had been in the Marines. Harry had been to Vietnam and was discharged with a Purple Heart he never talked about. In later years whenever Morrie would drive Harry would remind him their relationship was fated to this form from the beginning. “The Navy gives us rides, semper fi,” Harry would say. 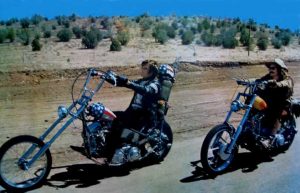 They met coming out of the theater after a showing of Easy Rider. Harry was lighting a cigarette when Morrie asked for a light. That night Harry was wearing his leather cowboy jacket with the fringes. His hair wasn’t long yet but with his cowboy hat and thick mustache a lot of people probably mistook him for Dennis Hopper. It wouldn’t be the last time that happened. The two men looked so much alike that when Harry later met Hopper at a party the actor swore they could have been brothers, and every time thereafter the two men would meet at parties, Hopper always referred to him as, “my brother Harry.”

Morrie accepted the zippo lighter from Harry and lit his cigar. He handed the lighter back and said, “Thank you.” Taking a pull from the stogie, Morrie eyed Harry and finally said, “You know, you look a lot like him.”

“Dennis Hopper,” Morrie answered. He smoked and examined Harry. “It’s the mustache, really, but also the cowboy hat and jacket.”

“He was in Rebel without a Cause, you know,” Harry offered. “He’s changed a lot since then.”

“Everybody’s changed a lot since then,” Morrie retorted.

They stood and smoked wordlessly for a few moments. The crowd leaving the theater began to thin out. A few feet away four people were sharing a joint. The sweet scent of it wafted over and attempted to overpower Morrie’s cigar.

Morrie broke the silence. “You ever ride one of those choppers?”

Harry shook his head. “I rode a regular Harley once but not a chopper.” 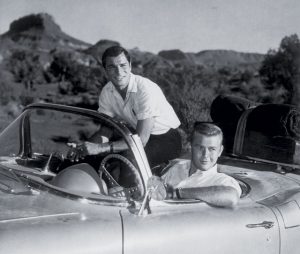 Harry nodded. “I’d rather drive a car myself. Maybe a Stingray. Like Tod and Buz.”

Morrie couldn’t contain his excitement. “Route 66! That was my favorite show.”

Harry agreed. “Mine, too. Especially the first season.”

“That show is why I got into movies,” Morrie told him.

“You’re in the movies?” Harry asked.

“You in the business?” Morrie asked him.

“If by ‘business’ you mean ‘selling boats,” Harry answered.

“This month, huh?” Morrie chuckled. “What about next month?”

“What were you doing last month? If you don’t mind my asking.”

Harry shook his head. “Security guard at the marina.”

“It’s just where I ended up.” Harry finished his cigarette and tossed the butt into the street.

Morrie thought a moment for something to say. This happens frequently in conversations with movie people when they meet regular people. Working in the movie industry completely absorbs your life. All your friends are movie people. All your wives are movie people. You go to movie parties. You read the industry trades. Every waking moment it’s movies movies movies. So when you meet a person who doesn’t work in the movies, you don’t know what to talk about. Often when people don’t know what to talk about, when the conversation comes to a halt because of it, they will reach back to earlier in the conversation and repeat a previous remark.

“I was stationed in Greece for most of it,” Morrie explained.

“That must’ve been nice.”

That was a real conversation stopper. Morrie waited a moment. Harry shifted on his feet as if to leave.

Hey,” Morrie said quickly. “You want to go to a party?”

Harry stood still and eyed Morrie suspiciously. He took a deep breath and then spoke carefully. “Look, I’m not queer or nothing,” he said.

Morrie laughed. “Me neither.”

Morrie nodded. “Then come on. You’re going to love this party.”

He began walking down the sidewalk. Harry seemed reluctant but followed and caught up to walk beside him.

“A friend of mine,” Morrie answered. “Well, really, a friend of a friend.” He took a puff of his cigar. “Well, actually, I work for him.”

“The boss of bosses,” Morrie told him. “It’s what they call the top guy in the Mafia.”

Morrie laughed. He was really beginning to like this guy. “No,” he answered. “Come on, you’ll be fine.” 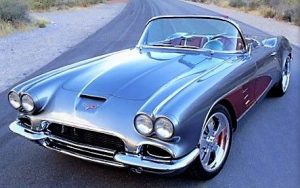 They continued walking. In a few yards Morrie turned and entered a parking lot. He approached the stand where the parking valet waited and handed the valet a ticket. Harry lit another cigarette and waited. Morrie paid the valet. The valet stamped the ticket and returned it to Morrie, who turned and began walking away. Harry followed. They walked past a dozen cars before Harry saw the Corvette. A silver 1961 Stingray. It was a beautiful car, and Morrie was standing next to it.

“Is this your car?” Harry asked him.

“Of course,” Morrie answered. “I told you it was my favorite show.”

Harry smiled. Morrie got behind the wheel. Harry took his time opening the door and slipping into the passenger seat.

One of them said, “This is the beginning of a beautiful friendship,” and both of them laughed.