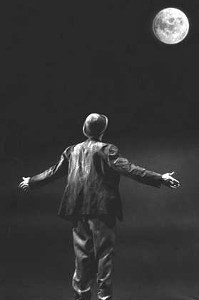 It was Tuesday and I was walking along Hollywood Boulevard when this woman approached me. Her skin was pale and her face so caked with cosmetics she could be the walking dead and no one would notice. She was wearing an overcoat the color of pea soup and a strange hat that looked as if it were made from an old cigar box. After a moment I realized it was in fact an upturned cigar box. On her feet she appeared to be wearing ruby red pumps made from the skins of artificial reptiles. She stopped and wagged a finger at me. She had jeweled rings on every finger of each hand. Even her thumbs.

“You’re that fool!” she exclaimed.

Not that I was certain of her specificity, I could not deny the implication. “We are all fools, madam, in the grand scheme of things.”

“Never mind that,” she said, shaking her head. She made a fist at me, then jammed both her fists into her hips. “When are you going to finish the story?” she demanded to know.

Not being a stranger to these encounters, being a longtime resident of Los Angeles, as well as a writer who is notorious beyond legendary as a Bartleby of the trade, I simply shrugged and continued on my way to meet with my spirit adviser.

“Write, fool! Write!” she shouted after me. For a second I wondered if this were my agent (who disappeared mysteriously three years prior while attempting to purchase salmon by the ton in Seattle).

Having a spirit adviser may seem to you an odd thing for a loudly self-avowed atheist-materialist. But such an assumption mistakes the use of the adjective form. The spirits of this adviser’s particular expertise are not the ones that reside only in imagination, nor do they haunt dusty old houses and ruined castles. These spirits live in bottles, and haunt only the minds of those whose tongues still long with a lingering taste of peace.

A spirit adviser knows just what drinks suit the troubled mind, just what liquors are best applied as soluble responses to the problems of modern life. He knows how to mix drinks, how this flavor mixes with that, but more: he knows how the drinks mix with you, how the application of a particular booze shapes and shifts your various moods.

Amateurs and dilettantes commonly believe that, when drinking long-term, it is ill-advised to mix your beverages. Wine and beer do not mix with liquor, and the various spirits being in disagreement, one cannot switch between whiskey and vodka and tequila and gin, but one must choose a poison, and stick with it all night until the very end. 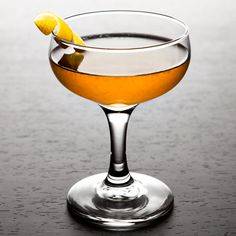 This is of course mostly gibbering nonsense. But there is a bit of wisdom in it. For the unknowing experimental imbiber may in fact concoct a mix which is disadvantageous to the senses, one which riles the stomach and rakes the bowels and twists the mind. Once when I was young and inexperienced in such chemistry, I daringly mixed tequila with gin, then splashed in a bit of Dr. Pepper for color. It somehow tasted like root beer and I drank a pint of it too fast. During what must have been a very prolonged alcoholic blackout, I surreptitiously entered the female dormitory and absconded with several brassieres. Fortunately none of them were in use at the time or else a hilarious misdemeanor settled by an apology might have escalated to a felony with intent.

The spirit adviser is an expert in the use of alcohol to enhance the psyche and uplift the soul. This is more than mere knowledge of tastes and effects of booze, and requires far more skill than even the most talented bartenders and mixologists. Not unlike a good therapist, the spirit adviser is a reader of moods as well as minds. Like an able attending physician, you tell the spirit adviser what ails you and he prescribes a remedy.

“I’ve had a fight with my wife about the bills again.”
“Two shots of rye with lemon.”

“I got a job at Miramax today.”
“Long Island Iced Tea.”

“I got laid off from my job at Miramax today.”
“Vodka martini, dirty.”

That sort of thing. These examples no doubt seem mundane, and they are deliberately so. The spirit master deals in sublime secrets that cannot be divulged to the sober and unknowing. Once you develop a relationship with a particular adviser, you are given something like a mantra, a particular drink combination known only to you and the spirit adviser. You are never to share this combination with anyone else, nor are you to divulge any other secrets of the spirits you may have learned or discerned during your meetings with the adviser.

When I finally arrived at the office of my spirit adviser, my perplexity from my encounter with the green-coat woman must have been evident. As he helped me with my coat, my spirit adviser asked me, “Did you run into another fan on your way here today?”

“I’m not sure if ‘fan’ is the right word,” I told him, and went on to describe the encounter.

He frowned and waved me over to the bar. Of course the spirit adviser has a full bar in his office. Imagine a therapist’s office but with a full bar instead of the comfy chairs and odd artwork. Rather than abstract artwork, the walls are decorated with photographs of old taverns, most of which amount to men standing around a bar, holding beverages and smiling. 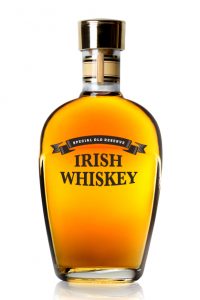 The spirit adviser hurried behind the bar and broke out a bottle of twenty-five year old Irish whiskey. I was surprised. The last time he hauled that out was when I got stabbed by the Madwoman of Kilkenny. The whiskey had been younger then, and so had we all, but the whiskey was the only one of us who had certainly improved with age.

My adviser put two tumblers on the bar — he meant for us both to drink — and poured two fingers in each. He corked the bottle and set it atop the bar, then picked up his glass and waited for me.

“It didn’t seem like that big of a bog,” I said. It really hadn’t. Encounters like that, on the street, happen to me almost every time I go out. If people don’t recognize me for me, they think I’m someone else. Consider the number of times people have called me “Jack” just because I’m wearing a wool overcoat, black beret, and Ray-Bans. Or those people who grab me by the shoulders and shout, “Mikey!” smiling until they realize with sudden surprise that I’m probably not “Mikey!” because “Mikey!” wouldn’t be kicking them in the shins while shouting Ukrainian profanities at them and attempting to flee.

My adviser shook his head and motioned for me to drink. It’s bad form for sure to ignore your spirit adviser, so I lifted my glass and drank. He drank with me, quick and clean. The whiskey did not so much burn as glow its way over my tongue and past my throat and down my esophagus where it hit my belly like a welcome bomb of golden waste.

The spirit adviser narrowed his eyes and looked at me. He seemed serious. For someone who, bottom line, isn’t much more than a fancy bartender, my spirit adviser has a way of looking at you like a priest who knows what you do when you’re alone. You have to have a heart of ice cold stone just to sit there and take it.

“What?” I asked, chuckling with discomfort. My heart is made of ice cream at best.

“When are you going to finish the story?” he asked.

“Finish the story,” I said.

“Yes,” he said. “Last I heard, you were kidnapped by German Freemasons.”

“Rosicrucians,” I corrected him.

“Right,” he said, looking me over. “Obviously, that’s no longer the situation.”

I wiggled my now empty glass. “Can I get another?”

He nodded assent and poured me a conservative amount. I nodded thanks and sipped it slowly, slowly as if I was respectfully considering the taste and patiently considering his question.

“So,” I said, patiently, slowly, respectfully, sipping. “Finish the story?”

I finished the drink, set the empty glass on the bar, and took a deep breath.

← How I Spent My Summer Vacation
Breakfast Apocalypse →