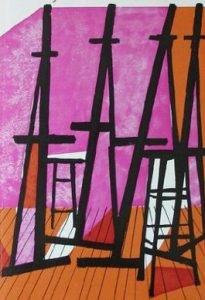 Art school was often about hanging out with other art students, smoking cigarettes and drinking beer, and usually talking or arguing about art, philosophy. or music. Most artists listen to a lot of music. Nobody paints in a quiet studio. In art school the painting studio was the location of many music arguments, as there was only one cassette deck and a limited supply of tapes. Most of us made mix tapes and brought them in during our allotted studio time. The rule of the day was pretty much that if it was your time in the studio, you got to pick the music. But at least three or four schedules often overlapped, so there would be the spectacle of four painters debating the merits of early Rolling Stones over later. My own position was that nobody can paint creatively and originally while listening to anything other than jazz. Also I preferred to smoke and drink whiskey while painting, at least one of which was actually forbidden in the studio. Not that forbidden things were not found in the studio. These are art students. They are learning to be artists. Sometimes I wondered at the weird place some of the art professors found themselves. Former raconteurs and rebels now turned authority figures. You could se it in their eyes whenever they had to rein us in, when we drank too much and missed classes, or cut corners in our work because we were burned out from midterms. Only a few of them never did this. Most seemed to take the job seriously enough that they conveniently forgot that twenty years or so ago it was them sitting on the student side of the desk, listening to someone explain the obvious, all the while wondering if and when you were going to explode.

“Do whatever you do intensely. The artist is the man who leaves the crowd and goes pioneering. With him there is an idea which is his life.” –Robert Henri, The Art Spirit

← Happy New Year
How I Spent My Summer Vacation →