It was the day after somebody shot Cindy Ryder’s dog with a crossbow and most of the people in town had heard about it. The dog wasn’t a particularly well-loved animal, but the shooting of any pet tends to heighten anxieties in such a small community. A group of animal lovers had gathered early in the morning before business hours outside the Landsburg General Store, where Sheriff Hansen was headed for his morning cup of coffee. He was looking for a way around the small crowd when he saw Bettina Gregory headed for him on a direct intercept course. She was a failed actress from the seventies who had bought property before the ski set had discovered the town. She and a dozen other locals were setting up chairs on the grassy knoll just outside the general store. Hansen tried to hide behind his hat but Bettina spotted him and called out to him. “Sheriff Hansen!” 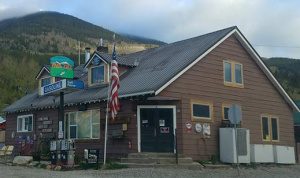 Hansen considered ducking his civic duty to deal with this, figuring it must be somehow above and beyond the call of duty to deal with political protesters before his first cup of coffee. The sheriff could barely think without coffee. But he could probably make it quick with Bettina. Whatever she was up to, it was likely harmless. He stopped and gave her a stiff smile. “Good morning, Bettina.”

Bettina had become somewhat of a reliable feature during any controversy around town. She and her small group of self-defined political activists could be counted on to appear at almost any public function, either in protest or support of whatever was going on. Sometimes it even seemed like they were both protesting and supporting. Being an actress, Bettina was well-practiced at performing in public and could excite as crowd as easily as she could calm one. She was either a gifted leader or a gifted actress, and Hansen wasn’t sure there was much difference between the two.

As Bettina zoomed in on the sheriff, the rest of her group continued setting up chairs. The chair thing was a gimmick Bettina had picked up from the History Channel. During a series about women’s right, Bettina had learned that an early suffragist named Dori Stevens and her followers had carried chairs during protest. The specific relevancy of the symbol to Stevens’ particular cause was not known to Bettina. It was the pragmatism of bringing chairs to a political protest that appealed to the sensibilities of her and her cadre. They usually set up extra chairs in case people wanted to join them, but since this almost always left half the chairs empty it often made the protesters seemed destitute and forlorn.

“I wanted to inform you that we would be holding a protest out here today,” Bettina told the sheriff.

“What are you protesting?” he asked. “Why here?”

“Somebody shot Cindy Ryder’s dog,” she said. “With a crossbow.”

Her indignation suggested that she thought he might not be aware of that, so he told her, “I know that. It’s under investigation.”

“We’re not protesting the way you’re handling the case,” Bettina said. She put both hands on her hips and looked at him with a polite smile, as if expecting him to recite his line. Hansen suddenly remembered that her claim to minor fame was a television series about cops and reporters. Or maybe it was cops and lawyers.

“What are you protesting then?” Hansen asked her. He really needed that coffee. He could almost taste it.

“Goodall’s is the only place in town that sells crossbow bolts,” she answered.

Maybe he could get Mele to throw a little whiskey in the coffee. “Bettina,” the sheriff began. “I’m not even sure that’s true. But what’s it got to do with anything?”

“Merle Goodall probably sold the crossbow bolt that Cindy Ryder’s dog was shot with!” She was exasperated that her reasoning was not obvious and apparent to him. “Who knows? Maybe he even sold them the crossbow.”

“Just because it’s legal doesn’t mean he has to sell them.”

Hansen looked at her and pretended to think about what she was saying. But really he was thinking about that coffee, and where Merle was stashing the Irish these days, and whether standing between the sheriff and his first cup of coffee might constitute obstruction of justice. “Listen,” he said to Bettina. “Why don’t I go inside and talk to Merle? I’m sure he’ll be okay with you and your people standing out here for an hour or so.”

“We intend to stay here all day and make sure he doesn’t sell any crossbow bolts,” she declared.

Hansen nodded. “Alright, alright.” He tipped his hat to her and walked quickly into the general store.

Merle Goodall was looking out the window at the crowd gathering front of the store. He gave a quick nod as Sheriff Hansen entered and rushed for the coffee pot. He waited for Hansen to pour himself a cup and take a sip before he asked him, “What’s going on out there, sheriff?” 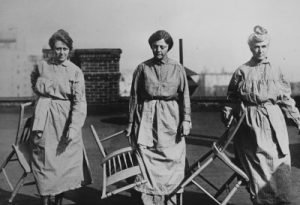 “What have I got to do with that?” Merla asked. “Do they think I shot him?”

Hansen sipped his coffee and shook his head. “Nope. They think you sold the bolt to whoever done the deed.”

Merle joined the sheriff in head-shaking. “I guess it’s possible,” he said. “But they might just as well have bought it at SuperSports in the city. Or even on the internet.”

“I know it, but you know there’s no talking to Bettina about these things.”

“I think that woman took way too many acid trips in the hippy days,” merla said. “If you ask me.”

Sheriff Hansen nodded. “There’s some others that say that.”

Merle looked out the window at the crowd. They were singing now. “We Shall Overcome.”

“What is it she wants me to do?” Merle asked.

“She said she intends that you sell no crossbow bolts today.”

Hansen shrugged. “She said today. But I don’t see much sense in that.”

“Go out there and ask her,” Merle said.

Hansen took a sip of his coffee, gave a mock salute and said, “Yes, sir!” He set the coffee down and walked back outside to the small group that had gathered there. He listened to them finish a chorus and then took a step toward Bettina to interrupt.

“Yes, sheriff?” Bettina asked. She smiled broadly and turned to face the crowd. It was theater to her.

Hansen was happy to play along. “Miss Gregory,” he said. “I’m sorry to interrupt your singing, but I’ve spoken to Merle about your demands.”

A half-dozen cheers rose from the small audience. Bettina waved two little fists in the air, then opened her palms to quiet the crowd. She turned to Sheriff Hansen and asked loudly, “What did he say, sheriff?”

“He was wondering, exactly what is it that you want him to do? Or not do, as the case may be?”

“Stop selling murder weapons!” someone shouted from the group.

“Some folks use crossbows to hunt,” the sheriff answered. “It’s not illegal.”

“That’s under investigation,” the sheriff retorted.

The group was silent a moment. Bettina’s smile grew uneasy. She turned to them and shoutded cheerfully, “What do we want?”

No one answered. Someone drove through the parking lot and tapped their horn and waved. Sheriff Hansen waved back.

The others were thinking and talking among themselves. Bettina walked over and joined the group. They began discussing things in an earnest and hushed tone. Hansen wondered how long this would take. Maybe the negotiations would go long enough that he could have another cup of coffee. But not too long to interfere with breakfast. Suddenly they were all nodding in agreement, then Bettina turned and quickly walked back to the sheriff.

“We would like him to close his business for the day,” Bettina told the sheriff. “In memory of the dog.”

Sheriff Hansen looked in her eyes to make sure she was serious. She was. He nodded and walked back into the store.

Merle thought about it. “Done,” he said, nodding. “Though I myself am a cat person.”

“Don’t dump that coffee,” Hansen told him. “I need another one.”

The sheriff walked back outside and delivered the news to the crowd. Bettina pumped her fists in victory. The half-dozen protesters cheered and started singing again. “We Are the Champions.”

Sheriff Hansen walked back into the store. Merle had already put on his hat and was pouring the remainder of the coffee into a thermos.

“Sorry about all that,” the sheriff said.

“Sorry, hell,” Merle told him. “I’m going fishing. You want to come with?”

Sheriff Hansen looked out the window. “Nope,” he said. “But I’ll sneak out the back with you.”

Merla parked his Subaru behind the general store. He always kept his fishing gear in the back of his station wagon. If Merle wasn’t working in the store, he was fishing on the river. He was always ready to go. This wouldn’t be the first day he had unexpectedly closed to go fishing. If the trout were rising, the posted store hours were unreliable at best. “Hopeful predictions” was more like it.

“I’ll tell everybody at Molly’s you’re up on the river,” the sheriff told Merle. “You can handle all the complaints tomorrow.”

“Do me a favor and don’t tell anyone,” Merle said. “We’ll see how many people notice and have ourselves a laugh tomorrow instead.”

Merle jumped into the front seat of the Subaru and tore out of the parking lot. Sheriff Hansen checked the back door to make sure it was locked, then headed back around to the front. Bettina Gregory was still out there with three or four of the lingering protesters. She saw the sheriff and called to him again. “Sheriff Hansen! There you are!” 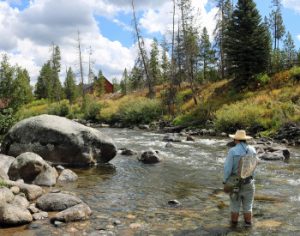 “Here I am,” Hansen replied. He smiled and made his way over to her. Already he wished he had gone with Merle.

“Sheriff Hansen,” Bettina said, grabbing his arm. “I just wanted to thank you for your help.”

She smiled. “Can I buy you breakfast?”

“You trying to bribe me?”

She laughed. “I always believe you should support your local sheriff,” she said.

“How could I say no?” Hansen answered.

She took his arm and they started walking the four blocks to Molly’s Diner. “You must think I’m a troublemaker,” she said coyly as they walked.

“Some folks are trouble,” he said. “And some folks just make some days more interesting than others.”

“Which one am I?” she asked coyly.

She laughed and gripped his arm tighter. Hansen looked up to the clear blue sky and wondered how the rest of his day would proceed. There is nothing like an interesting morning to start your day. At Molly’s there might be fresh strawberries for his pancakes, or Stu may have finally fixed the waffle iron. The coffee would be fresh and Bettina was in spite of her eccentricities a beautiful woman and a fine companion. Everyone would see them together at the diner and the rumors would be percolating all day. Maybe in the afternoon he would join Merle on the river. Some days seem longer than others, and some folks said it like gospel, and then there are the days you wish would never end.