What the hell am I doing in New York?

Every time I come to this city it’s raining. Seattle has the reputation for precipitation but it’s New York that really gets the rain. Gazing out the taxi window I can only remember the last time I was here, which was a long time ago. As in, Reagan was President. What the hell am I doing here now? 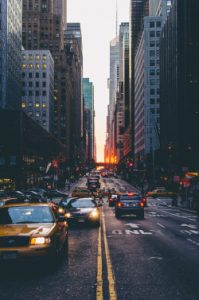 I must have said that out loud because the cab driver asks, “You’re asking me?”

“No,” I tell him, shaking my head. “Just thinking out loud.”

“Because I have no way of knowing,” he reminded me.

I nodded and thought about what it might have bene like when Harry Chapin was driving a taxi here. Did he sing you a folk song while he drove you from the airport to Manhattan? Did it take as long back then as it does now?

“The traffic is terrible tonight,” the driver observes. “I should have taken the bridge.”

There was nothing for me to say about it. I’m not even an expert on driving in Los Angeles. Driving is in fact one subject of which I am mostly entirely ignorant. A long time ago, I drove a car, but not for decades now.

“You must be accustomed to this traffic, being from Los Angeles,” the driver hypothesized.

I shrugged. “I suppose. It all pretty much looks the same from this perspective,” I told him.

“In LA?” I laughed and it came out a little giggly, almost crazy.

He laughed uneasily with me. “Yes, I have heard,” he told me. “Not like New York.”

“Not like New York indeed,” I agreed. The taxi started moving a little faster as the traffic started getting lighter. I watched the exit signs and street signs but had no idea where I was or where he was taking me. “Do you know any good cafes near my hotel?” I asked the driver.

He frowned. “Probably there is a cafe in the hotel,” he replied. “Or a Starbucks?”

“That is open at this hour?”

He shook his head slowly. “Probably you should ask the hotel.”

“It’s not really my neighborhood,” he told me.

He nodded. “There is this Greek place I know,” he told me. “Not really close to your hotel but close enough that it’s close if you don’t mind walking.”

He told me the name.

I took out my notebook and wrote down the name. “Should I tell them you sent me?”

“Why would you tell them that?”

“Maybe you know the owners or something.”

“I just go there sometimes,” he said. “To hang out. To meet friends.”

I put the notebook back into my pocket. “Maybe I’ll see you there,” I offered.

“It depends,” he said. “How long are you staying in the city?”

“Staying for the weekend?”

“What are you visiting for, if I may ask?”

In less than a second I thought of a dozen lies to tell him. There are the standards I report to most strangers (traveling salesman, visiting professor, etc.), and then there are the special ones, the tall-tales that on their surface are eminently unbelievable but which for some reason people always fall, proverbial hook and its usual companions. For example, I once took a cross-country bus trip, pretending to be a priest the whole time, doing my business in select stops all along the way. Once we were held over in Little Rock and I held a small religious meeting onboard a parked Greyhound. To add my own twist, most of what I told the listeners had been deemed heretical sometime in the Middle Ages.

The older I’ve gotten, the more experience I’ve become, and along with that I’ve grown tired of the lies. More than once I’ve wondered what would happen if I told a stranger my true mission. But if I was going to do that, I needed to play the part to its fullest.

“Do you mind if I smoke in your cab?” I asked the driver.

“Not at all,” he answered. He took out a pack of Turkish cigarettes and offered one to me.

I accepted, lit the cigarette and inhaled. Man, that Turkish tobacco hits hard. I suppressed a cough and opened the window about a half-inch. “Where are you from?” I asked him. “Ankara?”

His mouth dropped open, nearly dropping the Turkish oval he had tucked there. He looked at me wide-eyed in the rear view mirror. “How did you guess?”

“I’ve been in America ten years,” he said. “I didn’t think my accent was still there.” He lit his cigarette and inhaled deeply.

“There’s also a good random chance that you’re from one of the two biggest cities,” I added. “I took a chance it wasn’t Istanbul.”

“Not professionally,” I replied. “But it’s good for me to know accents.”

“Are you a translator?” he guessed.

“Actually, I don’t speak any languages other than English,” I told him. Then I corrected myself. “Well, a little French. Enough to order in a restaurant. And a few words of Spanish.”

“Los Angeles!” he said excitedly with a fair approximation for a Turk speaking Spanish. “Spanish is very common here as well.”

“You learn it by osmosis in LA.”

“Most Americans do not speak other languages,” the driver observed.

“You probably speak Arabic as well as Turkish, yes?”

“What do you mean by that?”

“Nothing,” I answered. “Just that there’s history there. The Ottomans and all that.”

“That is history,” he said. “It means nothing now.”

“I suppose that depends on your perspective.”

“It’s history, long ago,” he reiterated. “Besides, everyone’s dead.” 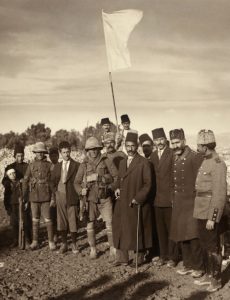 “That is true, that is true,” I agreed. “I can’t argue either of those points. It was long ago and pretty much everyone involved is dead.” The smoke was building up in the cab so I opened the window a bit more. “But I take contention with your assertion that history has no meaning. These events, though they occurred long ago and were perpetuated or endured by people now no long among the living, have a great deal of meaning and relevance in the world today.”

“You sound like my grandfather,” he said fondly. “He always talked of old history as if it were modern times. But it’s not.” He turned the car onto the street where my hotel was waiting. Instead of driving ahead to the hotel, he pulled the car to the curb and stopped gently. He shifted the gear level to ‘park’ and turned to talk with me, the engine idling.

“You are a historian,” he said. “Your mind is different. You are paid to remember.”

“What are you then?”

“You can keep guessing,” I said. “Or you can drive me the rest of the way to my hotel.” I took one last drag of my cigarette and tossed it out the half-open window.

He smoked calmly and looked at me form the corners of his eyes. He wanted me to think he was measuring me but it didn’t matter. He was measured already and would soon be fitted.

“I think you are with the government,” he said finally.

“That’s a pretty good guess,” I told him.

“Or maybe you want me to think you are with the government.”

He finished his cigarette and tossed it into the street. He nodded slowly, turned in his seat and put the car into gear. It was only a few yards to the hotel driveway. He probably could have coasted the entire trip. We pulled to a stop in front of the hotel and a valet came immediately to my door. The driver gave me the total and I went for my cash.

He took the cash without a word. As soon as I was clear of the car and the door was closed, he drove quickly away from the hotel.

The valet was saying something to me but I couldn’t hear over the roar of the car engine. “What was that?” I asked him.

“Did you have any bags?” the valet half-shouted. “Was your luggage in the back?”

We both stood watching the taxi as it sped away down the street. The sound of its engine faded into nothing as the car got further and further from us.

“Do you want someone to call the cab company for you?” the valet asked. “You could ask the concierge.”

“I have no idea what company to call,” I told him.

“I saw the company name on the door,” the valet said helpfully. He walked with me into the lobby to the concierge desk where they helped me place the call. A woman answered and took my name along with the complaint.

“Can you give us the driver’s name?” she asked.

“We talked about Ankara.”

“But you don’t know his name?”

“Did you get his license number?”

“You mean the license plate of the taxi?”

“No, sir, the number on his operator’s permit. It’s on display in every taxi.”

She asked for a description of the luggage, but I couldn’t remember which bag I had brought with me. I couldn’t really remember if I’d brought any luggage at all. But I must have. No one comes to New York for four days without any luggage.

Finally, she said, “This really isn’t much to go on, but all of our vehicles are checked thoroughly when returned to the livery. If there are any passenger items found, we collect them and hold them for thirty days.” She gave me the number of the lost and found department to call in the morning. During normal business hours. I thanked her and hung up the phone.

“Heck of a way to start your visit,” the concierge noted. “I hope your wallet wasn’t in there.”

Me, too. I checked my pockets and exhaled loudly when the wallet was there. I produced it and waved it victoriously in the air.

“Excellent, sir,” said the concierge, taking the offered credit card. “Lets get you checked in.”