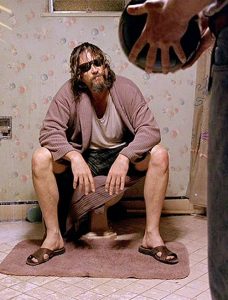 Written and directed by Joel and Ethan Coen, The Big Lebowski is most notably a delightful sendup of film noir tropes, a particular twist on the “man who knew too much.” Drawn into a series of strange events due to a case of mistaken identity, Jeff Lebowski is a man who knows far too little about anything other than bowling. By the end of the mystery he still knows very little about what has happened, but we have enjoyed a fantastic story (partially narrated by a grizzled cowboy) in a brightly lit Los Angeles that’s as seedy and grim as any noir city.

The Big Lebowski also functions as a deft employment of the Hero Cycle, famously described by Joseph Campbell and utilized by Hollywood screenwriters since the mid-1970s, when a guy named Lucas wrote a script about a hero name Luke by cribbing his entire structure from Campbell’s cycle. The screen trade has been nuts about it ever since. It’s a useful structure, essentially a progressive story arc that moves the hero from a state of ordinary existence to one of transcendence and ultimately unity with the cosmos. This monomythic narrative is common to the stories of Jesus, Buddha, Moses, Superman, and Neo. It’s also the Lebowski mythic cycle, replete with archetypes such as the Helper (Walter Sobchak), the Goddess (Maude Lebowski), and the Threshold Guardians (the nihilists). Various climatic moments in the episodic story correspond with the steps of the Hero’s Journey, from the various Challenges and Temptations which confront Jeff Lebowksi (particularly those posed by Jackie Treehorn) to the sexual and reproductive gifts bestowed upon him by the Goddess Maude.

If Jeff is the hero of the story, who (or what) is the big Lebowski? Ostensibly this moniker refers to the elder Jeffrey Lebowski, portrayed with raging gusto by David Huddleston. He appears to be a millionaire, though is ultimately revealed as dependent on his daughter’s beneficence, a bellowing Oz without even a curtain to hide his fraud. He is finally rendered impotent and inert by the Helper Sobchak when he tosses the paralyzed veteran onto the floor. If this Lebowski is “big,” it is only in appearance; the hovering shot of the flattened elder Lebowski on the floor at the feet of both Walter and Jeff surely indicates his smallness.

The realization of the Hero’s Journey is that the hero synthesizes the experiences of trial and temptation into a powerful “elixir” which emboldens and empowers him throughout the remainder of his life. The heroic cycle thus becomes a kind of karmic wheel, the heroic figure engaged in soul-searching and ethics-defining moments as well as facing physical challenges and temptations. This is reminiscent of the overall “cycle of life” which governs all of existence: birth, dying, and rebirth. On the first journey through this life-cycle, the hero is born ordinary, “dies” (become transformed) and is reborn as heroic, which by default requires engaging in further heroic acts, continuing the cycle of life.

In the act of procreation, male and female merge to create the synthesis of a child. We know for certain that “little Lebowski” is waiting to be born, and it may be in this fact that we’re given a glimpse of what is truly “big” about Lebowski. In his final soliloquy, the cowboy narrator reminds us of the cycle of heroic life by lamenting Donnie’s death but noting the impending birth of Jeff and Maude’s child. The cycle of death and resurrection is the final act of apotheosis for the hero. Here the metaphor is, like much of what the Cowboy says, less than subtle: “It’s good knowin’ he’s out there, the Dude, takin’ her easy for all us sinners.” Somewhere out there in the “stupefying” City of Angels, a shaggy messiah shuffles along the aisles of the all-night supermarket, his raiment a ratty bathrobe and his aura reeking of weed, while “the whole durned human comedy keeps perpetuatin’ it-self.” 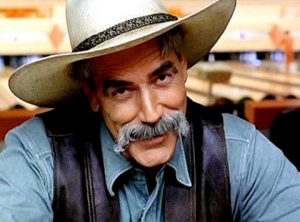 ← They Hunt Truffles, Don’t They?
The Investigation of the Missing →