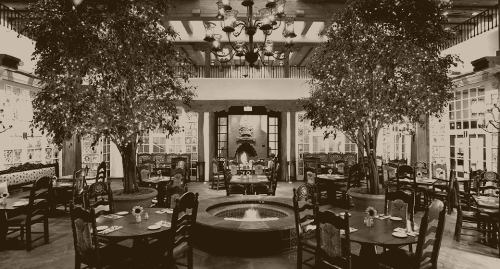 Back in the Eighties sometimes we would spend long hours drinking cocktails and talking about the things people talk about when they spend long hours drinking cocktails. There was an old editor who lived in the village and enjoyed taking small groups of young writers out for dinner and drinks. We usually met at this grand old hotel near the plaza, a vast adobe structure that supposedly sat on the very location of the first inn ever built in the village. So it was said by some that the site was haunted by nearly a half-century of hospitality and hostelry. The contemporary structure had been built in the Twenties and thus had witnessed over six decades of history. Most of the literary luminaries who ever passed through the village passed through the hotel. The editor, having retired from the city some years ago, loved to gather us at her table and tell us stories about the literary guard, the gospel and acts of legendary authors and esteemed editors she had known in her youth. We would of course fawn over these stories, pretending we’d never heard them before, though many of us could recite them rote. She would occasionally bring one of these old guard to meet us, and of course we would fawn over them and their stories. Some of the tales told by these visitors were Rashomon perspectives of the events recounted previously by our host. Occasionally she and the guest would argue politely about which version was nearest the truth, both of them admitting to faults of mind or indulgences of the kind that might inhibit accurate recollection. There was never any hostility involved in their disagreement: just two old-timers reminiscing, each of them remembering the same things in a different manner, neither assuming any judgment of the other, neither conceding their version to the other. There was barely any dispute at all, and what little argument existed was mere a disagreement in facts, and only minor facts at that. It didn’t seem even to influence the point of a story, nor its purpose in being told to us. It was nothing more than two witnesses with two versions of events, not competing but coinciding. They could just as well agree that both versions were equally real, that there is no truth in memory, and there is no point in arguing over what we have forgotten.

← True Day
With Antony at Actium →