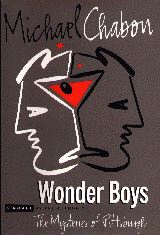 (I originally wrote this review in 1995, long before there was a movie and the book became a bestseller. Back then I had created the first website for Chabon’s work, an archive of which can be found here.)

A young man stands in the darkened back yard, holding a small silver pistol to his temple. An older man watches from the deck of the house, his back turned to a party of his friends and colleagues.

This is the image that started Michael Chabon on the path of writing Wonder Boys, his latest novel. The would-be suicide is James Leer, the dark and gifted student of the older man, Grady Tripp. The incident marks the beginning of their bizarre adventure together, which takes them from stolid academic parties to seedy Pittsburgh bars. Along the way they move through a collection of stray people, including Tripp’s soon-to-be ex-wife, his alternately eccentric and solemn Jewish in-laws, his pregnant and demanding mistress, and her husband, the cuckolded collector of DiMaggio memorabilia (who also happens to be the chairman of the English department where Tripp teaches). Not nearly the least of Tripp’s comrades is Terry Crabtree, his decadent editor and best-friend, who enters the story accompanied by a beautiful tranvestite.

The tale of Grady Tripp is not simply the story of some philandering academic: Tripp is also a writer, who is hard at work on a grand project titled “Wonder Boys.” This novel is to be the story of the Wonder family, whose epic tale encompasses several decades of Pennsylvania history. With over a thousand pages of manuscript done, Tripp is only half-finished. Or so he says to anyone who asks, primarily Crabtree, who is pushing Tripp for a final product. In truth, Tripp has no idea where the book is going. Filled with long histories of Indian burial grounds and genealogies of horses, the unfinished tome has become that writer’s nightmare, “the book that will kill me.” Not only has the novel wandered from the path of what any sensible reader would call “distracted” — it has careened into the territory of chaos. The writer himself cannot even remember much of what he has written, and the only character who attempts to read the manuscript falls asleep after a few hundred pages. Add to Tripp’s wreck of a personal and professional life his unabashed fondness (and frequent use) of marijuana and you get a riotous tale of decadence and depravity in modern academia.

I suppose that last part sounds like a book critic talking. More earthy words might say that Tripp is so goddam baked that he has no idea what he is writing. In fact, he’s stoned so often that when one character asks him “Are you stoned right now, by any chance?” he has to do an old-fashioned double-take and make sure: he’s not, which is a rare occurrence. If Wonder Boys were to be made into a film, it would provoke the same hue and cry about cannabis usage that Richard Linklater’s Dazed and Confused managed to elicit a year or so ago. (The book does have the same effect as the movie: both will give you the gnawing urge to spark up a bowl.)

Grady Tripp is nothing if not a wreck. The sheer enormity of his fucked up life brings to mind the epic decline of Rome, with its wild orgies and sadistic emperors. There are no love trysts with horses (although a giant snake does appear), but the bear-like Tripp somehow manages to bring to ruin not only himself but very nearly every life he touches. He is haunted along the way by an errant tuba and the memory of the first writer he ever met: August Van Zorn, an old scribe of the Lovecraft vein who rocked away in the late hours, penning his tales about supernatural madness. It is their dual plagiarism of an obscure Van Zorn tale that brings Tripp and Crabtree together in college; it is also the image of the lonely Van Zorn, who killed himself after the death of his wife, that haunts Tripp as a writer.

Like Chabon’s earlier work, the best-selling Mysteries of Pittsburg, this novel has a very personal feel to it. It is not surprising to discover that Chabon himself — as he revealed on Tom Snyder’s talk show for insomniacs — was long at work on a huge manuscript, which seemed to never near completion. (Chabon artfully dodged a question from Snyder about his use of “tea.”) Wonder Boys, though, does not suffer from the occasional undergraduate self-indulgence of Chabon’s first novel (a pill I’m still trying to swallow); it is a very mature and well-rounded work, evidence of a writer who is not afraid of the fine turn of a phrase or even a little romanticism.

If Cheezemeister Leonard Maltin were a book reviewer, he would say: “Wonder Boys is truly a wonderful book.” Thank God I’m not Leonard Maltin, but he would be correct with this infantile pun. The novel is a wild, hilarious jaunt through a few days of creative abandon. It very accurately represents the goings-on of the small English departments that cover America, where marital infidelity is as common as golf or deconstruction. Chabon has proven himself to be that most unicorn-like of literary creatures, “the writer’s writer,” who can only be captured by a virgin with pure thoughts. Lucky for you the book can be found at any decent bookstore.