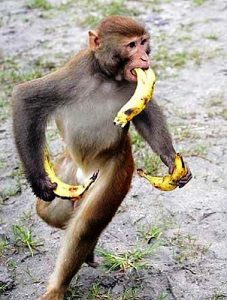 I’m a Hollywood monkey, so my favorite meetings are the ones with fruit. This is also why I like visiting the set: Craft Services usually has fruit, and there’s often a lot of it, because everyone else is eating donuts or chips. Inappropriate starches are not my thing, but bananas, as you know, are a monkey’s best friend.

When they called the meeting, I had less than 24 hours to prepare. It was necessary that I print new copies of the latest draft, along with character descriptions, a scene-by-scene breakdown, the original treatment (which barely resembled the latest draft… meaning I had to write a new treatment), and of course the various reports that some producers like to see, which list characters, the number of lines they have, number of exterior locations, etc. I’m lucky there are three different copy places within a block of the Monkey House.

But I had to do all this before the meeting at 9:00AM, and I’m more than a bit compulsive, so I was working at it all day. Around seven that evening, as I was getting ready to take the pile to be copied twenty times (even though there were only eight people in the meeting), I got a call wondering why I wasn’t at the dinner meeting yet. Oy. So I gave the #1 LA excuse (“I’m stuck in traffic”), dropped off the materials to be copied, rushed back home, dressed for dinner, then rushed to dinner. Funny thing, I was not the only person late for dinner.

Nor was I the only person who was late for the morning meeting. But I was the only person who didn’t want to have donuts and coffee, so a producer’s assistant stole some bananas from another meeting and gave them to me. (The very best people in this town are often the assistants to some of the very worst.) Thanking her, I took a banana and started peeling.

“What the hell are you doing?” the producer asked me. His face was registering the shock usually displayed by people watching a cow give birth to a pony.

On a hunch, I decided he wasn’t being existential. “I’m eating a banana,” I answered. I didn’t know what else to say.

“But you’re holding it upside down. And peeling it backwards.”

I licked banana goo of my fingers and took a bite of the fruit. It was a very good banana. Then I held the banana out in my fist, the stem gripped in my hand, the top of the banana peeled back and the white meat gleaming under the pulse of the overhead fluorescents.

“Bananas grow upside down,” I told him. “So I’m holding it by the bottom. The other way, the way most people do it, is backwards.”

Something about my answer bothered the man. He slumped back in his chair and said nothing until about a half-hour into the meeting. Someone asked him what was on his mind.

“This kid and his banana,” he began. “It’s all wrong. He’s holding it upside-down. But he says it’s right-side up. He’s got the banana, he’s peeling the banana, but it’s all turned around. Look, he’s doing it again.”

I was eating another banana. You might think this is rude, eating in the middle of a meeting, but it happens all the time. I once saw a well-known director eat an entire ham during a table reading.

“See? He’s holding the banana wrong!” The producer stood and pointed straight at me. My mouth was full of banana, so I said nothing.

“I think we should all take a breath here,” another producer offered. “Let’s get our bearings straight. We’re not here to talk about other people’s food choices or their dietary practices.”

“Everything’s kosher, right?” another producer commented. I think it was meant to be a joke.

“No, it’s all wrong.” The producer had stood now. His hands were shaking as he talked. “People do things a certain way. People have expectations. Audiences have expectations. If we tell people they’re going to tune in and see a monkey eating a banana, then they damn well better tune in and see a monkey eating a banana. And he’s gotta be eating the banana the way people expect him to be eating that banana. None of this new-fangled experimental banana-eating. Maybe I’m out of touch with the youth market, but I know people expect to see what they’ve been promised. And we’re promising a banana-eating monkey, and this is what we’ve got!”

He waved his hands at me as I finished the second banana. It tasted even better than the first one. The meat wasn’t gritty or pulpy, and there was a slight tang to the flavor. Whenever I go somewhere else, I’ve noticed bananas are very different. They aren’t quite the right color, or their taste is just a little off. In Arkansas I stumbled across orange bananas that smelled like grapefruit. I thought maybe someone had done some genetic engineering. Monsanto Makes a Better Banana, that kind of thing.

A few of the other producers urged the upset producer to sit, but he refused. “I don’t know if I can go on like this,” he said.

I cleared my throat. “If you want,” I offered. “If it will help, I can always eat a banana the way you prefer, which is upside-down to me, but I can do it.”

The producer shook his head and plopped back into his chair.

Another producer smiled broadly at me. “That’s very generous of you. But I’m not sure we have any more bananas.”

The helpful assistant managed to find another banana. There was a sound engineer whose mother still sent him to work with packed lunched. It took a promise of series work, but the sound engineer gave up his banana. They brought it to me on a plate – not silver, but instead made of transparent blue glass.

I took the banana and looked across the table at the producer. “Now, I’m going to do this, but I’m going to do it slightly different than you expect. Just, you know, bear with me, even though I’m a monkey and not a bear.”

Without a moment of hesitation, I jumped atop the table and began to hop up and down, like Cheetah used to do when Tarzan promised him a trip to the zoo so he could throw feces at monkeys in cages. I grabbed one of the track lights and hung upside down over the table. Gripping the banana by its stem, I slowly peeled it the way monkeys do.

The disgruntled producer took a deep breath. All the other producers laughed and applauded, a few exclaiming their praise. I finished the banana, slipped down from the overhead light, and settled back into my chair.

“How’s that?” I asked the producer.

He sighed and ran his hands through his thinning hair. “I guess it’ll do.”

A week later I was surprised to receive a giant fruit basket from the very production house where we’d had the meeting. The basket consisted of about a dozen bananas, several apples, a few oranges (which I threw at the postman when he didn’t have any new Netflix for me), and a nice but unsigned thank-you note. I called someone to find out the deal, since that production house had passed on the project. It seemed the agitated producer had experienced “some problems” and had been “let go.” His assistant had been promoted to his position, and it was she who had sent me the basket.

One thing about Hollywood: the fruits are everywhere, and the fruit is always good. You might just have to look at things a little differently, but once you do, you can see the good in almost everything. 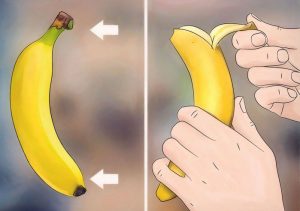