The door was locked, the key tossed over the wall and into the night. His brother and the rescued hostages were safe on the other side, headed for the waiting boats and their escape.

Tetsuo turned and faced the dozen warriors amassed before him. Some of them stood with their jaws slack, amazed at the sacrifice of this lone samurai. Two of the swordsmen nearest Tetsuo paused, holding their attacks. Sanjuro, the bandit leader, stood with them, his own eyes wide with surprise.

Tetsuo raised his blade and drew in a breath. This katana was his favorite, the one his father had given him nearly twenty years before. The kami of swords had told Tetsuo the name in a dream. It was a secret which Tetsuo had never told anyone, not even his brother Katsurou. 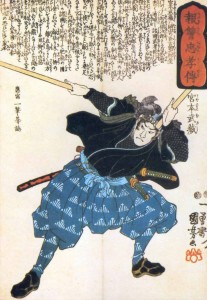 Sanjuro spoke. “You are Ishimaru Tetsuo.”

“The one they call tiger-killer?”

“There are no tigers here,” Sanjuro told him.

Sanjuro nodded to one of the swordsmen, who stepped forward and thrust his blade. Tetsuo parried, then swiftly attacked with two blows to the man’s neck. The leather armor was not enough. The man fell dead without a cry, blood gushing from the wound. Two of the swordsmen behind the dead man stepped back.

“Move forward!” Sanjuro ordered. The two swordsmen hesitated, then took a step over their fallen comrade.

Tetsuo attacked them, nearly severing the arm of one and ending the other man with a thrust and slash to the vitals. Both men screamed and fell to the ground, then tumble off the walkway and into the mud below.

Sanjuro steadied his blade. “Four of you,” he called to his men. “Attack now!”
Tetsuo’s wounds bound him to this spot, and the walkway was too narrow for movement. There would be no retreating from these blows. He wondered briefly if he would be able to hold off four attackers. His knees were growing weak from blood loss, but he could still hold his sword upright.

Three swordsmen stepped forward and joined the fourth. They waited, watching Tetsuo. Sanjuro eyed them all. “What are you waiting for?”

The four men exchanged glances. With a sharp cry, the largest of them raised his sword and attacked with all his strength.

Tetsuo barely parried the blow. Suddenly two of the other swordsmen lunged forward, thrusting with the tips of their blades. Tetsuo moved quickly to dodge one blow and parry the other. The dodged sword glanced off Tetsuo’s leather armor, but the other pierced his leg. He grimaced from the pain of it but kept upright, though he was bent slightly at the middle now from fatigue and bleeding. The fourth took a feeble swing that missed. Tetsuo swung at him in return but also missed.

The swordsmen readied another attack, but Sanjuro shouted, “Wait!” He waved his hand at them to step back. The swordsmen obeyed. Sanjuro lowered his sword and gestured to Tetsuo.

“Give up,” Sanjuro told him. “You are wounded and bleeding. You can barely stand.”

Sanjuro went on. “You are known across Japan for your bravery in battle. No one will fault you for being taken prisoner.”

Sanjuro continued. “You have fought honorably. You have killed over a dozen of my men. You have rescued the hostages. Your friends have escaped. This is a victory for you. I offer you this chance to surrender.”

Tetsuo remained silent. He drew in a controlled breath and exhaled slowly.

“This is a victory for you,” Sanjuro said again. “There is no shame, no dishonor.”

Tetsuo straightened and raised his sword. “Thank you for letting me catch my breath.”
Sanjuro shook his head. “Don’t be a stubborn bull. My men will cut you down like a dog. You will die in the mud like a pig.”

Tetsuo spat blood onto the ground and glared at Sanjuro. “Are you a farmer or a fighter?”

“You do not have to die today, samurai.”

“Today or tomorrow, now or later, this life always ends in death,” Tetsuo told him.

“Very well.” Sanjuro raised his sword and saluted Tetsuo. “I will finish you myself,” Sanjuro said. “Do you have any final requests or sentiments, tiger-killer?”

“Give me your word that when I am dead you will deliver this sword to my brother.”

Sanjuro nodded. “It will be done.”

Tetsuo exhaled and swung his sword.

In later years, many former soldiers of the rebel army would claim to have seen the final duel of the man who came to be known as Ishimaru Tetsuo Kiratora. All would begin the tale with the heroic image of the samurai guarding the open door as his companions passed through, then locking the door and tossing the key over the wall to prevent pursuit. Most tales relate Tetsuo’s words to one of his companions, though each accounting relates different orders to a different warrior. Some versions have the tiger-killer tersely directing his young brother-in-law (who had been a hostage of the rebels), “Guard my brother, and take care of your sister. Tell her I am sorry I did not keep my promise.” Other accounts feature more directives, and at least one presents a short speech on death and honor. The version favored by many, the story told by Tetsuo’s trusted ally Tokaji Shiki (who was witness to many events, and who later interviewed several of the rebel soldiers), has the doomed samurai offer the terse directive to his brother-in-law, then finish with a mysterious poetic uttering:

Death comes to all that live.
It is as inescapable as breathing,
the inevitable result of being born.

If these lines strike the reader as fatalistic, the subsequent duel between Ishimaru and the rebel known only as Sanjuro suggests no resignation in the mind or will of the tiger-killer. All versions of the story feature the renowned swordsman successfully defending himself against an initial onslaught of strong attacks. Most agree that Sanjuro was overconfident in his belief that his opponent was too wounded to present much challenged, and so committed himself to a series of all-out attacks. Tetsuo surprised the bandit by not only defending against the first two, but successfully counterattacking the third onslaught and wounding Sanjuro’s leg.

Tokaji recounts the remainder of the duel as a valiant series of tactics employed by Ishimaru Tetsuo in his last stand. After defending the aggressive attacks, Tetsuo himself threw caution to the wind and attempted to intimidate Sanjuro with a wild war cry and a committed thrusting attack. Sanjuro only avoided disembowelment by stepping backward, nearly stumbling into the group of men who had gathered to watch the fight. Many storytellers relate that Sanjuro gasped in fear at this point, and one version has the bandit offer once more to allow Tetsuo’s surrender. But all versions agree on what happened next.

From the docks and over the wall Tetsuo heard the sound of a horn. Then a voice cried out, “They are escaping!”

Tetsuo took a breath and said a quick prayer to the kami of swords, asking that his blade be guided by the spirits to attain their will in this duel. Confident in this and his skill, Tetsuo risked a step forward. His head swum with the effort and he nearly lost consciousness, but his will prevailed. He steeled himself and stared into the eyes of Sanjuro.

“Dog,” Tetsuo whispered. “Leader of goats. Are you prepared to die?”

Sanjuro was taken aback. Then he smiled and chuckled. “Look at you. Your guts are nearly at your feet. Your arms are like broken trees and your legs are bleeding like a river.”

“You’re a fine poet,” Tetsuo offered. “But are you prepared to die?”

“Are you prepared to live?”

“What do you mean?” Sanjuro asked. Form somewhere in the crowd a voice shouted, “Kill him!” Sanjuro could not be sure which man the voice intended to die: clearly there were now soldiers who, moved by Tetsuo’s display, were secretly hoping the samurai would prevail.

“It is a simple question.”

“I am already dead,” Tetsuo told him. “I was born dying, and lived to die. My duty is to serve and die.”

“Then do your duty, samurai.”

From the cries of the men outside the wall, Tetsuo could tell his brother and friends had made their escape. There was little chance of the soldiers catching up to them by either land or water. He could be confident in the safety of his family and peers.

Tetsuo readied his sword, holding it steady and upright.

Sanjuro swung. His blade arced through the air and toward Tetsuo’s neck.

Tetsuo moved to parry, but Sanjuro’s blade was quicker. The steel drove through the leather armor and sliced deeply into Tetsuo’s neck. Blood surged from the wound. Tetsuo staggered, his blade dipping downward. He reached for his neck and fell to his knees.
More than one voice shouted, “Finish him!”

Sanjuro raised his sword, placed the tip carefully between Tetsuo’s shoulder and clavicle, then pushed it firmly downward. Ishimaru Tetsuo stiffened as the blade severed his spine and drove through his lung and heart. Sanjuro withdrew his blade and the tiger-killer slumped to the ground, dead.

Afterward a dozen soldiers watched in silence as Sanjuro carefully wiped the Ishimaru blade clean and returned it to its sheath. He then carried the sword back to his command tent, where he called for his most trusted corporal.

“I have a very important task for you,” Sanjuro told the corporal.

“You were witness to the duel, were you not?” Sanjuro asked the corporal.

“It was a fair and honorable duel, do you agree?”

“The samurai fought with great honor, bravery, and strength. Do you agree?”

Sanjuro held the Ishimaru katana out to the corporal. “You will deliver this blade to Lord Ishimaru Katsourou, the brother of the samurai, and testify to those facts.”

The corporal hesitated. His throat was suddenly very dry ad he swallowed the lump that was forming there.

“What is it?” Sanjuro asked.

“Surely, sir, they will execute me.”

“Perhaps,” Sanjuro replied. “But as the samurai said: today or tomorrow, now or later, this life always ends in death. Does it not?” Sanjuro placed a hand on the hilt of his tanto and glared at the corporal.

The corporal waited, uncertain of how to answer, unable to take his eyes from his captain’s hand. Now the lump from his throat seemed thoroughly lodged in his stomach.

“It is not that I fear death, sir,” the corporal stuttered. “It’s, uh, well, sir, you are the one who made the promise.”

“What is your point?”

“Well, sir, with no disrespect, you might anger the kami of swords if you do not fulfill the task yourself. As you promised. Sir.”

Sanjuro eyed the corporal for a moment, then grunted with disgust and took the sword. “Very well. I will fulfill the task myself, as I promised.”

The corporal swallowed and started to speak. “Sir. . .”

The corporal nodded and quickly walked away.

Sanjuro set the sword carefully aside and opened the wooden trunk containing his personal belongings. There were several silk bandages, packed there by his wife. He took a roll of them and respectfully wrapped the sheathed sword. He would deliver the sword himself, and stand before Lord Ishimaru and tell him that his brother died honorably. There could be no better witness to this fact than the man who killed him. 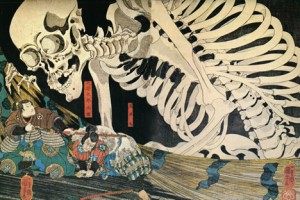