It’s a meeting. Two producers are already in the room, each of them with a manila folder of notes open on the conference table. The assistant holds the door for me. She closes the door behind me as I enter. One of the producers stands and introduces himself as Ken. He introduces the other producer as Kyle. Kyle does not stand or greet me. He merely glances up from his notes for a moment, then returns to studying them as if they are the revealed word of the gods and not just the typescript of what he blathered into a mini-recorder while drunk the night before.

Ken takes his seat and I take mine. Ken begins the meeting by telling me they both read the script and the both loved it.

Kyle clears his throat and sits back in his chair. “We have notes.”

“It’s what I’m known for,” I tell him. There is no room in Hollywood for humility, so I don’t even try it.

“There are some third act problems,” Kyle begins. He doesn’t like the way the cop shoots the woman in the park.

“Have you lived in Los Angeles very long?” I ask him.

“Where are you from?”

“What difference does it make?”

“I’m a student of human geography,” I tell him. “I like to find out where people are from and keep a record of it in my head. Nobody in LA is from LA. Everybody here is from somewhere else.”

Ken chimes in. “I’m from Sacramento.”

“Isn’t that near LA?” Kyle asks. He’s definitely from out of state.

“No, it’s not near LA,” I tell Kyle. “Nothing is near LA. The only thing near LA is LA. Everything else is a hundred miles away. Two and a half hours by car.”

“You know, I took a helicopter up to the valley last week and it only took us twenty minutes.”

“In Hollywood,” I tell him. “Down the street from me. The cops shot an old homeless woman. I saw the whole thing. I was walking out of Trader Joe’s with espresso beans.”

“Those chocolate covered ones?” Ken asks. “I love those.”

“Those are the ones,” I tell him. “I’m glad I had them because it gave me something to do while I waited two hours for them not to take my statement.”

“You saw the whole thing,” Ken says. “Why didn’t they take your statement?” 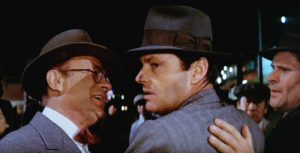 Ken looks puzzled. “I thought you said this was in Hollywood.” He frowns, leans closer and says quietly, “You know my name is Ken, right?”

“Who the fuck cares about an old homeless woman?” Kyle says loudly. “We’ve got problems with this script. That’s no fucking homeless woman the cop shoots in the park. It’s a fucking white woman with a baby. Cops don’t fucking shoot white women.”

“How long did you say you’d lived here?”

“You already fit in well,” I tell him.

Kyle glares at me. “You must not want to sell this fucking thing.”

“Will you change the scene?”

“Will you pay me to change the scene?”

“We want to buy it,” Ken interjects. “But we want you to change a few things before we buy it.”

“You want to buy it, buy it. You want me to change something, buy it and pay me to change it. That’s the way it works, fellas.”

“It’s like we’re buying a new car,” Kyle says. “We’re looking at the showroom model and we like what we’re looking at, only we want a few extras. Like a plush leather interior.”

“You want a plush leather interior?”

“We want you to change that scene.”

I take a breath. “Okay. Is it okay for the cops to shoot an Asian woman?”

“No baby. How about a couple of nuns? Can the cops shoot a nun?”

Kyle looks at Ken. “I don’t think he’s serious about this.”

Ken looks at Kyle. “He’s serious. Just give him room.”

I look at them both. “Okay. I’ll change it. A couple of skateboarders,” I offer. “The cops shoot a skateboarder.”

I nodded. “What other extras do you want?”

“The love interest,” Kyle tells me.

I frown. “There is no love interest.”

“We understand that,” Ken tells me. “In fact, we even agree with you.”

“If you agree with me why do you want me to change it?”

“There are no leads in the script for women,” Kyle starts.

“I know that. I wrote the script.”

Kyle sighs. “It’s difficult for us to get financing for something when there are no lead roles for women.”

“Why? Are you soliciting funds from NOW?”

“It’s not a feminist thing,” Kyle says. “It’s a mater of casting. And awards. We can’t get a Best Actress award if there’s no female lead to nominate.”

“If we don’t tack on a false love interest then maybe we can win Best Original Screenplay.”

“You think this is that good?”

“I wrote it. Of course I think it’s that good.”

“You think highly of yourself.”

“I had a principal in high school who taught me to sell myself, or else no one would buy.”

“He was a basketball coach.”

“Did you play basketball?”

“There’s no role for Meryl Streep,” I remind him.

“That’s right. So right there we got a problem. Right there you already fuck up your chance for a three-point shot.”