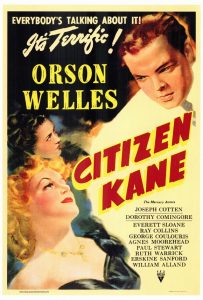 My friend MacGilleathain, art critic and budo master, had never seen Citizen Kane. So we bought two big cans of Scottish ale and staked out the front row of the underground repertory theater. The cinema was literally underground, converted from an old subterranean experimental theater stage, so the front row was not too close to the screen. It was in fact an ideal position from which to watch an epic like Citizen Kane. The two of us had sat in the same spot and stared googly-eyed at Lawrence of Arabia just the weekend before. We’d opted for several pints of British nut brown ale during that screening and had to be helped out at the end of it. It’s a long movie, you know.

Citizen Kane is not that long of a movie so we proceeded with haste to get plastered and watch the story unfold. This was our usual thing and we were vets enough at it that we could be drunk as Irish politicans and still retain our critical faculties. MacGilleathain was famous for getting sloshed at art openings and engaging the artists in deep, serious discussions about their work. I’d been thrown out of at least three local bars for starting fist fights over favorite poets, quoting vast segments of Whitman and Rimbaud while guzzling beer from giant glass pitchers fit for Vikings. Once the two of us tangled with two hippies who insisted that Jim Morrisson was “the greatest poet who ever lived.” MacGilleathain and I took turns kicking them in the ribs while reciting Shakespeare. “What a tangled web we weave…” Boot to the ribs. “When first we practice…” Boot to the ribs. “To deceive!” Boot to the ribs.

The lagers lasted us all the way through the movie and we dashed for the men’s room. It is not our practice to converse while micturating, so it wasn’t until we were out the door and back into the word that MacGilleathain said very slowly and dramatically, “What. A. Piece. Of. Shit!”

“What the hell are you talking about, you goddam Scottish pig?” I took a swing at his shaved head but he ducked and cuffed me across the ear. I backed up and growled at him. He stepped in but a quick poke to his ribs told him I meant business. He backed away and showed his teeth, then laughed so loudly it frighted a couple of hipsters up ahead.

“That film is a classic, you pederastic Philistine.”

“That was only once,” he replied. “And she looked more like twenty than fifteen.” He took out a cigarette and lit it. “And that movie was boring.”

“What in the name of the eightfold path is wrong with you to think that Citizen Kane is ‘boring?'” I asked insistently. “Not to mention the fact that ‘boring’ is not exactly a word with any critical value.”

“There was no tension,” he continued. “No mystery. No drama. It was like an extended March of Time newsreel. All melodrama. And bad acting.”

“Bad acting?” I had to give him the melodrama. “I think you’ve had enough to drink tonight, sir!” I fretted a moment, drawing a breath and forming my thoughts. “No mystery? What about Rosebud? The central mystery under investigation.”

MacGilleathain snorted. “What mystery? I knew all along it was the goddam sled.”

“Because you’ve heard it before,” I claimed. “Even people who’ve never seen the movie know about the sled.”

“I didn’t know about the sled,” he said.

“You know about it. Everybody knows about it. It’s a goddam New Yorker cartoon.”

“What else could it be but the sled?” he asked me. “Think about it.”

I nodded, still trying to think of another candidate for Rosebud.

“He even uses it to push away the rich dweeb,” MacGilleathain added. “Like it’s a shield, the only thing between being a little boy and growing up to be a pinched and bitter old fart.”

“You make a good point,” I admitted. Then I laughed.

“His mother,” I said. “Funny that you should suggest that.”

“You don’t know the story about that?”

He shook his head, so I told him the story. When I was finished, he chuckled and said, “I see what you mean.”

“Freud would have a field day,” I said unnecessarily.

“I told you. I don’t know anything about that movie. I certainly didn’t know the whole thing was an extended joke about pubic hair.”

“Well, I think there’s a bit more to it than that.”

“I’ve heard people talk about it,” MacGilleathain continued. “Mostly a bunch of pretentious twits calling it ‘the greatest film of all time’ or whatever. You know, the kind of people who use the word ‘film’ instead of movie, or who ‘go to the cinema to see a film’ rather than just go to the movies.”

“The greatest movie of all time,” I repeated. “That’s because every year it tops critics’ lists for ‘best movies of all time’ or whatever.”

“That’s always different. No two critics agree on the second best movie of all time. Just that Citizen Kane is the greatest.”

“Whenever that many people agree about something, it’s probably bullshit.”

“It is bullshit,” I agreed. “Everyone knows the greatest movie ever made is…”

MacGilleathain screamed, “Don’t say it!” and lunged at my throat.