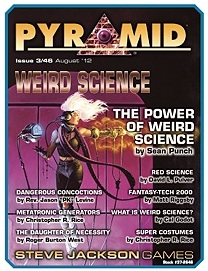 In the simplest of gaming terms, “weird science” is a way to have “magical powers” in a campaign world that doesn’t have magic or psionics. Weird inventions and theories based in at least the minimal application of the scientific method replace spell systems and psychic talents. In such a GURPS campaign, a weird scientist might devise something like “Explosive Lightning” by tapping the Orgone, channeling it through an array of Tibetan crystals, to create a focused beam of plasma energy.

You can’t read the piece online (you must buy the magazine to read it, an arcane and quaint notion) but the free preview will give you some idea of the issue’s other contents. Sean Punch takes a look at Weird Science through the lens of GURPS 4th edition Powers, offering a new Talent and expanding on the existing skill. Jason Levine delivers some weird science drug cocktails in “Dangerous Concoctions,” and the “Eidetic Memory” column delivers some colorful weird science that seems inspired by J.J. Abrams’ apparent obsession with red balls of exotic matter. And then there’s Matt Rigsby’s ingenious adaptation of weird science to the tech levels most often found in traditional fantasy games. Delightful!

The entire issue is full of good stuff – it may be my bias toward the subject matter, but this is one fantastic issue.