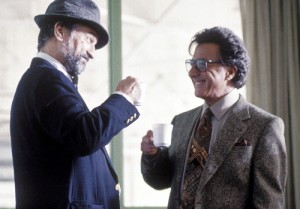 Wag the Dog is a brilliantly conceived and executed satire of the relationship between media and politics. The film skewers the “politics as spectacle” that has come to dominate national politics. Conrad Brean doesn’t simply manipulate the truth – he manipulates reality itself. Though he does not create an actual war in Albania, it is easy to see that his skills could be used to create a situation in which an actual war could erupt. The only thing that prevents an actual war from erupting is the brief period of time that this charade is necessary: Brean only needs the semblance of war a few days, just enough to get the President re-elected. The hyper-reality that he creates is laughably unrealistic: it is a truism of conspiracy politics that the more people involved, the less likely the secret will remain secret. It is doubtful that an operation such a false war could be kept so secret these days: numerous private companies provide unclassified satellite reconnaissance data, for example, that would allow even the laziest and most incompetent reporter to easily discern the truth of the “Albanian crisis.” Many media sources utilized this private data verify government claims of military success during the first Gulf War, which considerably pre-dates Wag the Dog. (Interestingly, all such data was classified during the recent initial operations in Afghanistan and Iraq. But even then the classification was limited to the crucial period of the initiation of military operations.) But it is the enormity of the Brean operation, with its similarity to such other media-hype events as “We Are the World” (and the contemporary “War on Terror”) that gives the movie its satirical bite.

← Primary Colors and the 1992 Clinton Campaign
Day of the Goon →