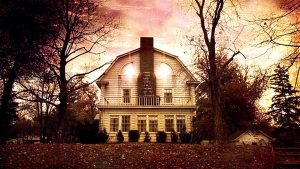 Owning property has its risks. The torture of escrow is not always the end of the horror. Plumbing and electrical problems can drive a home owner to bankruptcy. Structural issues can make an erstwhile home into a house of death. Then there are the utility and maintenance costs. The average homeowner often seems to occupy one of the middle rungs of Hell.

But owning a home is an integral third of the American Dream. Along with family and career, it comprises the Holy Trinity of our capitalist economy. Shelter is also one of the essentials to survival, as necessary as clothing and food even for those without a family. Only the homeless are free of the burden of renting or owning.

The essence of horror is the disturbance of peaceful reality by a terrifying events. Few more peaceful realities are imagined than the idea of home. It’s the middle-class castle, a sanctum against the perils of the world, where the backyard barbecue becomes a fantastic feast of royals. Not a public place, the interior of a home is divided into spaces with varying degrees of privacy. Exterior features of the home, such as a swimming pool or garage, are mostly advertisements of success, a kind of consumer heraldry for those who know the code. Front yards may display elaborate topiary or sedate gardens, again usually representing some public declaration of identity or posture. It’s inside the home where the real action takes place. Home is where the heart is, and the heart of the home is an interesting place indeed.

Because it is both a private sanctum and a public symbol, the home is a place where we are particularly vulnerable. It is where we hang our hat and let our hair down, after all. No matter what sort of day, once you’ve passed the threshold of the front door, you’re home. Home free. Unbuckle that belt, take off that girdle. No one can see you now. People often feel so comfortable within the walls of their homes that they unknowingly parade naked in front of open windows. Others feel so protected in that space they knowingly parade naked at those windows. Deeper within the home are our secret places, bedrooms (with fewer windows) and bathrooms (usually only one window), and within them the most private place of all: the closets, within which lurk skeletal metaphors of our deepest and perhaps most horrific secrets. 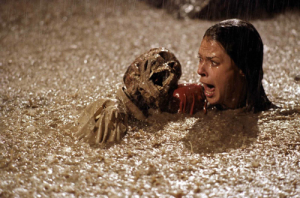 These particular qualities of home are what give rise to a very popular and powerful sub-genre of horror film I refer to as “real estate horror.” The typical plot of these films involves a protagonist who has recently acquired valuable property, often at a bargain. Probably the most well-known example of this film is The Amityville Horror, but other examples abound. While it is a type of “haunted house” film, not every haunted house film is real estate horror. Key to this species of film is some personal investment by the protagonist in the haunted property. Films that center on the investigations of a haunted house, for example, do not qualify. Additionally, real estate horror does not necessarily involve a house, nor is it necessarily the house that is haunted. Tobe Hooper’s Poltergeist (1982) is an example of this: it is not the house that is the problem, but the property on which the house is built. Further, neither a stationary structure or permanent physical property are requirements for the home: Wes Craven’s The Hills Have Eyes (1977) notably moves the home into the desert to meet the cannibal clan, reversing the usual path and allowing the home to invade the horror.

Of course, as noted earlier, there are real horrors involved in the ownership of property. Real estate horror includes naturalistic disasters as well as supernatural ones. The horrific events of Samuel Peckinpah’s Straw Dogs involve no ghosts or goblins, and the similar home invasion of The Strangers (2008) is entirely human horror. But admittedly the real estate horror invariably involves supernatural events that upset and threaten to destroy the peaceful nature of home. The usual foils and foibles of owning a home are generally played to comic effect in cinema. A notable mixture of these elements is found in The ‘Burbs (1989), a horror-comedy where Tom Hanks is beleaguered by odd and apparently horrific neighbors.

The desire to own a home is said to be in the heart of every American. Truth or myth, this makes the home one of the most powerful points of vulnerability for the horror tale to exploit. As long as home ownership and private property exist, real estate horror is likely to remain a popular and viable source of entertaining terror.

← Enter the Germans
What Happened to Harry →