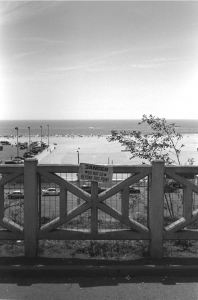 This is the last place anyone saw Elias Croehe. He was drinking a tropical milkshake and staring out at the ocean.

After he disappeared, his family and friends looked for him everywhere. On the beach, around the neighborhood. They went back to the park by the beach every day for two weeks. To no avail.

The Coast Guard kept watch for his body but it never washed ashore. Nobody knows if he went near the water at all. Elias didn’t know how to swim, and he didn’t really like the ocean. He just came here for the view.

His sister thinks that aliens got him. His mother thinks it may be the start of the Rapture.

Last night insomnia kept me roaming the hallways long after midnight. I sat at the back bay window that looked down onto the alley and watched various people going through our garbage.

I looked west and for some reason thought I could see the sunrise but realized it was only the reflection of dawn in the windows.